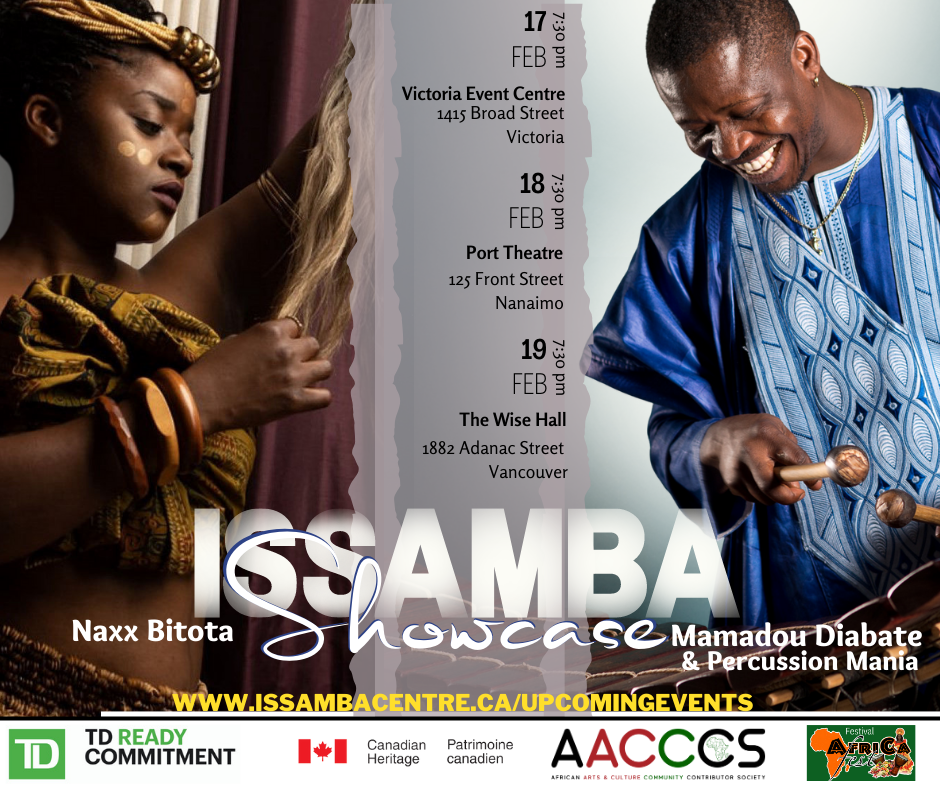 As part of our Black History Month-long celebration in February 2023, internationally acclaimed artiste, Mamadou Diabate with Percussion Mania and Montreal-based artiste Naxx Bitota will take us on the musical experience of a lifetime – ISSAMBA showcase: a journey through the depths of African-rooted rhythms.

When Mamadou Diabete plays the balafon, the blending of the harmonies of traditional African instruments and century-old sounds stirs something deep within the listener that is unlike any familiar emotion – an awakening. As Mamadou’s lightning-paced mallet caresses balafon and the nostalgic notes of the African melodies explode in a crescendo, the listener is transported to space where sound, light, and energies synergize to transcend cultural boundaries. Mamadou Diabate is an award-winning balafon master and composer born in Burkina Faso. His formation, Percussion Mania, is recognized around the world as the only one with two Balafons as lead instruments. Their music is an enthralling journey, deep into the heritage of West Africa  – that is as intricately crafted as it is bold and unrestrained – unearthing a new level of musicality.
https://www.mamadoudiabate.com/

Born under the sun of the Democratic Republic of Congo, Naxx discovered her passion for music at the early age of 9 and dreamed of making a career out of it. She pursued this dream by joining several choirs of various styles from gospel to traditional, classical to folk. Her determination to see her dreams to fruition took her on a journey across continents from The
DRC in Central Africa to Belgium, Europe, and Quebec, Canada in 2008.

A cross between Miriam Makeba and Whitney Houston, with strong influences from her classical background and traditional styles, Mutuashi and Congolese Rumba, Naxx Bitota
always finds a way to unite and honour the different regions of Africa with her unique blend of Congo rhythms and refreshing Afropop sounds that evoke deep emotions in the
listener. https://naxxbitota.com/