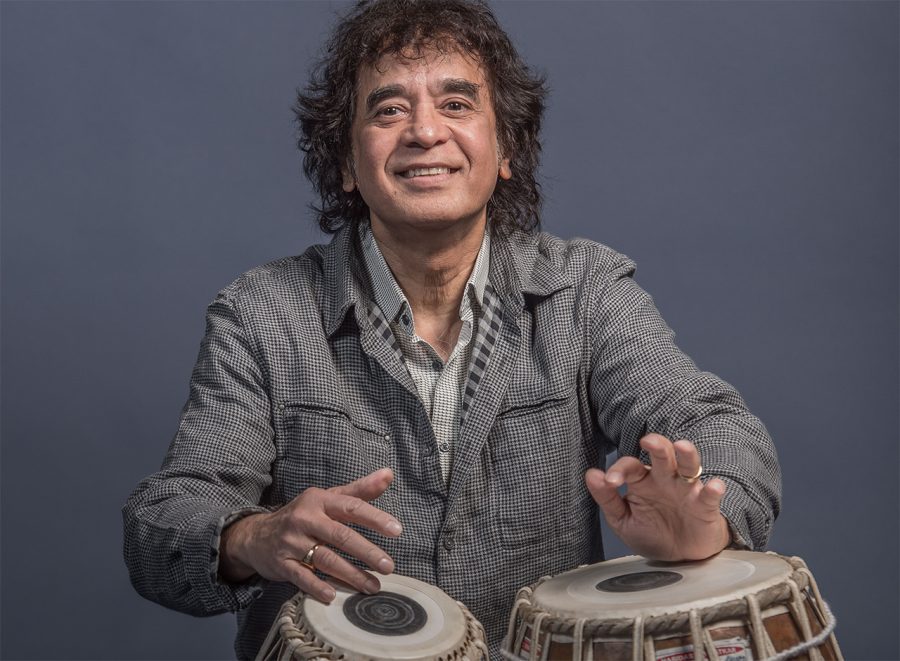 VIP Tickets - Best Seats in the House plus a Private After-Show Meet and Greet with Zakir Hussain and his group.  Buy VIP tickets online or call Kamal at 604-833-1977

Every other year for the past thirty years, Zakir Hussain has served as curator, conductor, and producer for his series, Zakir Hussain and Masters of Percussion, which brings the very cream of Indian music and world percussion to tour America and Europe
Growing out of his renowned international tabla duet tours with his father, the legendary Ustad Allarakha, Masters of Percussion began as a platform for both popular and rarely heard rhythm traditions from India. While performing and collaborating in India for a few months every year, Zakir has sought and unearthed lesser-known folk and classical traditions which feed into the greater stream of Indian music, playing an educational role in affording them greater visibility, as well as introducing them to audiences in the West. Over time, the constantly changing ensemble has expanded to include great drummers and percussionists from many world traditions, including jazz and Latin music.
All of it creates a truly beautiful field from which he can bring Masters of Percussion to the West. The 2023 version will be no exception, presenting audiences with extraordinary, exciting, and spontaneous combinations of percussive as well as melodic performances.
Past years have included master drummers from Central Asia, India, and the U.S., virtuosi like Abbos Kosimov, a master of the Uzbek frame drum known as the doyra, Marcus Gilmore, the most talked about young jazz drummer of our time, Eric Harland of Sangam, and Niladri Kumar, the great young sitarist.
They play individually and together, and the results are unforgettable; 2023 will be no exception.   It will feature Zakir Hussain, Sabir Khan, Tupac Mantilla, Melissa Hié, and Navin Sharma.

ZAKIR HUSSAIN
The pre-eminent classical tabla virtuoso of our time, Zakir Hussain is appreciated as one of the world’s most esteemed and influential musicians, one whose mastery of his percussion instrument has taken it to a new level transcending cultures and national borders. Along with his legendary father and teacher, Ustad Allarakha, he has elevated the status of the tabla both in India and around the world.
A child prodigy touring in India from the tender age of twelve, Zakir quickly became a favorite accompanist for India’s greatest musicians and dancers. He began his international touring career by the age of eighteen and has been at the helm of many genre-defying collaborations including Shakti, Remember Shakti, Masters of Percussion, the Diga Rhythm Band, Planet Drum, Tabla Beat Science and Sangam. His first solo album Making Music was released in 1987, acclaimed as “one of the most inspired East-West fusion albums ever recorded”. In 1991, Planet Drum, an album co-created and produced with Mickey Hart, became the first recording to win a Grammy in the Best World Music category and the Downbeat Critics’ Poll for Best World Beat Album. Zakir’s music and extraordinary contribution to the music world were honored in April 2009, with four widely-heralded and sold-out concerts for Carnegie Hall’s Artist Perspective series.
Zakir is the 2022 Kyoto Prize Laureate in Arts and Philosophy and is the recipient of countless awards, including two Grammys, Padma Bhushan, Padma Shri, Officier in France’s Order of Arts and Letters, the 2022 Aga Khan Music Award and the 1999 National Heritage Fellowship, the USA’s highest honor for a master of traditional arts. Voted “Best Percussionist” by both the Downbeat Critics’ Poll and Modern Drummer’s Reader’s Poll over several years, including 2020, Zakir was honored with SFJazz’s Lifetime Achievement Award at their 2017 Gala for his “unparalleled contribution to the world of music”.
As a composer, he has scored music for numerous feature films, and has composed three concertos, the most recent enjoying the distinction as first-ever for tabla and orchestra. In 2009, Triple Concerto for Banjo, Bass and Tabla and new works composed by Zakir, Edgar Meyer and Bela Fleck, were released as the Grammy-nominated The Melody of Rhythm. Zakir’s second concerto, Ameen, Amen, Shanti - Concerto for Four Soloists, a special commission for the National Symphony Orchestra, premiered at Kennedy Center in March 2011, and his third concerto, Concerto for Tabla and Orchestra, was premiered in September 2015, by the Symphony Orchestra of India, subsequently enjoying international premieres.
Zakir’s career as an educator is no less splendid, having led workshops and master classes all over the world over the course of his career.  He has been a professor at Princeton University, Stanford University, University of Washington, and at UC Berkeley in the prestigious post of Regents Lecturer. Zakir’s yearly tabla workshop in Marin County, California, draws hundreds of serious students and performers.  In 2019, he was selected as a Sangeet Natak Akademi Fellow and awarded honorary doctorates from Berklee College of Music, Boston, from Indira Kala Sangeet University, Khairagarh, and, in 2022, from Mumbai University.
Zakir is the founder and president of Moment Records, an independent record label presenting rare live concert recordings of Indian classical music and world music.

SABIR KHAN
Sabir Sultan Khan is an Indian sarangi player and the son of legendary sarangi player and vocalist Padma Bhushan Ustad Sultan Khan. He belongs to the Sikar gharana (school) of music which has given several stalwarts to Indian classical music.
Khan was born in Jodhpur, Rajasthan. He was exposed to music when he was six years old through his grandfather, Ustad Gulab Khan. He trained under his Father, Grandfather, and his Uncle Ustad Nasir Khan. He is the Tenth generation of his family to take up sarangi. His great-grandfather Ustad Azim Khan Sahab was a court musician at Sikar, Rajasthan.
Khan is known today for his mastery of sarangi. His technique of playing is a rare combination of sur and laya (note and rhythm).
Khan has performed with his father in concert and also solo. He has performed alongside artists such as Ustad Zakir Hussain, Pandit Birju Maharaj, Ustad Rashid Khan, Gazal maestro Ustad Gulam Ali, Lata Mangeshkar, Asha Bhosle, etc.
He has played in feature films like Laal Singh Chadda, Dangal, Badlapur, Rog, Dor, Sanwariya, Jodha Akbar, and many more.  He was part of A.R. Rehman and Shreya Ghosal's episode for MTV Unplugged.
He also composed Songs for movies like The Dark Side of Life, Mumbai City, Direct Ishq, and Ghustakia Single for Zee Music
Khan has recently opened his new record label, SSB Records, where there are many talented artists as well as celebrity singers featuring Salim-Sulaiman, Yasser Desai, Madhur Sharma, Pawandeep Rajan, and more.

TUPAC MANTILLA
Tupac was born in Bogota, Columbia, and graduated with a Master of Music Honors Degree from the New England Conservatory.  He has worked with Bobby McFerrin, Esperanza Spalding, Danilo Perez, and Julian Lage in what might loosely be called the world of jazz, but he was also the First Prize winner at the 2002 Bogota Philharmonic Orchestra’s Classical Soloist Competition.
He has been associated with Stanford University’s Jazz Workshop and the Berklee College Global Jazz Institute, and lectures and administers percussion programs worldwide through his PERCUATION’s Global Rhythm Institute.
He has appeared at venues and festivals including Carnegie Hall, Lincoln Center, the Kennedy Center, the Barbican, Tanglewood, Montreux, and the Newport Jazz Festivals among many others.
Much of his current performing focuses on his “Solo Percussion” project, which has led him to develop R.I.T.M.O. (Rhythmic Immersion Training for Multidimensional Openness), a holistic learning methodology that studies life and rhythm and the use of the body as a musical and evolutionary tool.

MELISSA HIE
Melissa Hié grew up in a musician family and was a member of the family band from a very young age. Her father taught her how to play several instruments, including balafon, barra and djembe. This enabled her to acquire a strong knowledge of African traditional rhythms and develop her own soft and melodic touch. At nine years old, she chose Djembe as her main instrument. She then began playing in various formations and bands as a percussionist. To reinforce her skills, she continued to discover other instruments such as the conga. She further developed her artistic skills (singing, dance, computer music) through several collaborations, including major projects with artists such as Damon Albarn and Fatoumata Diawara. Today, she enjoys experimenting with music in unexpected ways and explores various genres ranging from jazz to electronic music.

NAVIN SHARMA
Navin is the great young master of the dholak (a double-headed hand drum), part of Indian folk tradition.  He studied dholak with his first teacher, his father Shri Shyam Rughuram Sharma.  Having taught him much, Shri Shyam then sent Navin to the great Ustad Allarakha (playing partner of Pandit Ravi Shankar; together they were essential in introducing Indian music to the U.S.) to study the tabla.
Life being the great circle it is, Navin now finds himself playing with Allarakhha’s son Zakir, having already played with Zakir’s brothers Shri Fazal Quereshi and Shri Taufiq Quereshi, Pandit Anindo Chatterjee, Shri Ranjeet Barot, Shri Selvaganesh, Shri Shivamani, and the Maestro of the ghatam, the clay pot drum, “Vikku” Vinayakram.  Navin has also worked extensively in Bollywood.